Al-Kadhimi: The Iraqi army is responsible for protecting the protesters

Al-Kadhimi: The Iraqi army is responsible for protecting the protesters 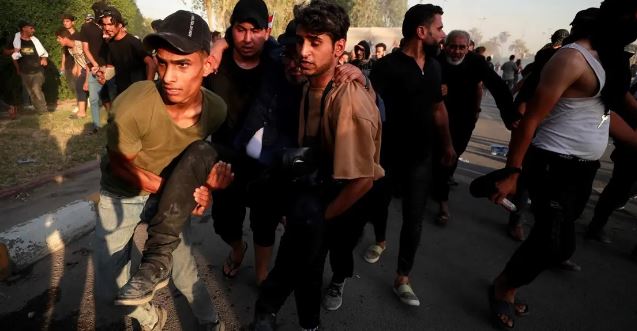 Today, Monday, Iraqi Prime Minister Mustafa Kazemi issued a directive prohibiting the use of bullets and shooting at demonstrators by any security, military or armed group.

Kazemi said in a statement issued by his media office, "Our security forces have a duty to protect the demonstrators, and any violation of the instructions will be pursued by law, and we call on all Iraqis to abide by the curfew decision."

A sudden and sharp decline in "Bitcoin" .. What are its causes? NEWS

The Iraqi Prime Minister also indicated that an urgent investigation is conducted into the events that occurred in the Green Zone in the capital, Baghdad, the source of the shooting, and the identification of negligent persons and their legal accountability.

Earlier today, Iraqi Prime Minister Mustafa Al Qasimi reiterated his call for the demonstrators to leave the Green Zone immediately in an emergency meeting held today for the security leaders at the Joint Operations Headquarters to discuss recent events and the demonstrators' access to government institutions.

The leaders of the United States, the United Kingdom, France and Germany discuss the Iranian nuclear issue - NEWS

This comes after Muqtada al-Sadr's supporters went to the Green Zone in the capital, Baghdad, on Monday, and attacked the presidential palace, prompting the security to fire tear gas to disperse them and regain control of the leader of the Sadrist movement, Muqtada, who finally takes political measures after a crisis. Da-Sadr also announces his retirement The political situation in Iraq is bleak.

Meanwhile, gunmen in the crowd fired live ammunition and clashed with the demonstrators.

According to Agence France-Presse, 12 protesters were killed in Baghdad's Green Zone and 85 others were wounded.

For its part, the Iraqi Joint Operations Command announced a comprehensive curfew in all parts of the country, starting at seven in the evening today, local time, following protests from supporters of the Sadrist movement, whose leader announced his retirement from political work.

It is worth noting that this retirement step comes at a sensitive time for the country, especially the ongoing political crisis since the last parliamentary elections that were held on October 10 (2021) last year, with the intensification and intensification of the dispute between the Sadrist movement and the Sadrist movement. Frame, including Nuri al-Maliki. Al-Fateh coalition factions and parties loyal to Iran.