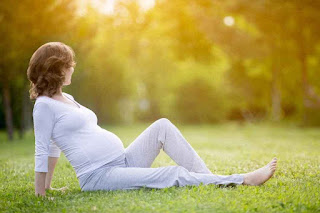 Pregnancy occurs when an egg is fertilized by a sperm, then this fertilized egg grows and develops inside the uterus to form a fetus, and it is worth noting that the pregnancy period takes approximately 264 days from the beginning of fertilization of the egg,

which is equivalent to about 38 months, but doctors calculate the pregnancy From the first day of the last menstrual cycle,

so the pregnancy is 280 days or 40 weeks, and it should be noted that some symptoms appear on the woman that indicates pregnancy,

and weight gain, Darkening of the color of the nipples, the appearance of secretions from the breast, and urination more frequently than usual,

and the movement of the fetus is felt by the expectant mother after approximately 20 weeks of pregnancy.

When does the gestational sac appear?

and usually, the appearance of the gestational sac is the first The signs of pregnancy that appear on the ultrasound device,

which can appear after the first 3 weeks of pregnancy, and the average diameter of the gestational sac at this time is estimated at about 2-3 mm,

and after approximately five and a half weeks of pregnancy, The yolk sac appears inside the gestational sac,

and it should be noted that the gestational sac appears on a transabdominal ultrasound when the levels of the human chorionic gonadotropin hormone, known as the pregnancy hormone, rise and reach approximately 1500 -2000 international units/liter,

and here we point out that the hCG hormone is found in the blood from the beginning of the implantation of the fertilized egg or fetus in the wall of the uterus,

only about 7 days after ovulation.

The case of an empty gestational sac (in English: anembryonic gestation), or what is known as an embryonic pregnancy, occurs when the fetus stops growing in the early stages of pregnancy,

and it is absorbed and disposed of so that the gestational sac remains empty, even before the woman knows that she is pregnant,

and usually, the reason is The exact reason behind this is unknown, but it may be due to the presence of disorders in the chromosomes of the fertilized egg,

It should be noted that a woman who has an empty gestational sac will suffer from the usual symptoms of pregnancy, such as the absence of a period, and positive results may appear when Conducting pregnancy detection tests,

so most pregnant women who have an empty gestational sac expect that their pregnancy will be healthy, due to the appearance of symptoms of normal pregnancy,

and it is also worth noting that the placenta may continue to grow without the presence of a fetus Inside it for a short period,

in addition to the fact that pregnancy hormones may continue to rise as well, which leads to the conviction of the woman that she is pregnant,

and it is also possible that the woman suffers from some abdominal pain and the occurrence of a little drip or bleeding from the vagina.

It should be noted that if an empty pregnancy bag is discovered during the doctor’s visit, the doctor will discuss the affected woman with the available treatments that can be provided, taking into account the length of pregnancy,

medical history, and the emotional state of the woman, when determining the most appropriate treatment option, and among the most prominent of these The options are the following:

Tips for a healthy pregnancy

Good care and comprehensive care that a woman should receive before pregnancy, during pregnancy, and before the time of childbirth include many tips and procedures,

such as maintaining a healthy diet and following some healthy habits. Other things that women must follow during these periods are the following:

What are the causes of ectopic pregnancy?
Pregnancy and Birth pregnancy diseases Pregnancy symptoms